Thank you! Your submission has been received!
Oops! Something went wrong while submitting the form.

Fairway is closed Monday, January 16th in observation of the holiday. Normal business hours will resume on Tuesday,  January 17th.  We wish you and your family a safe and happy holiday!

About Us
Locations
Loan Products
Calculators
videos
Get started 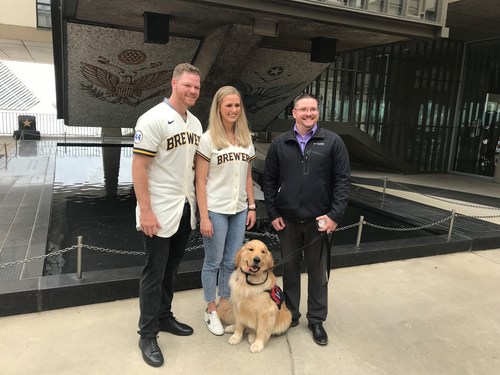 Sievila joined the Army in 2004 as an infantryman and served in Iraq from 2006 to 2007.  Following his deployment, Sievila was commissioned as a second lieutenant, and he eventually switched careers in the military and became a scout platoon leader.  Sievila was medically discharged from service in 2015 and diagnosed with PTSD.

Sievila describes his return to civilian life as challenging and difficult and said that the feeling of isolation and depression created a lot of irritability and anger outbursts. Fortunately, that has changed since receiving his sponsored service dog, a Golden Retriever named Willard.

“Willard definitely brings up a lot of peace and joy to my life,” Sievila said. “He's adorable and very friendly. He keeps me calm and the anger and the irritability that I was experiencing before just hasn't been there like it used to be, and that brings me a lot of hope for the future. The bond that he and I have already started to develop has been wonderful.”

Wisconsin-based Fairway, a proud sponsor of the Milwaukee Brewers™, funds the non-profit American Warrior Initiative that has donated hundreds of service dogs to deserving veterans and active military members.  "Our goal is to fund 100 service dogs in 2021,” said Louise Thaxton, AWI director/co-founder and a Fairway branch manager.  “We are grateful for the opportunity to continue to support our nation's veterans in their journey back to civilian life.”

A video of the Fairway- Brewers™-AWI service dog donation can be found here.

Fairway Independent Mortgage Corporation (NMLS #2289) is a full-service mortgage lender with a wide array of innovative products that help make homeownership more affordable with the speed and service its clients deserve. Based in Madison, Wisconsin, Fairway is dedicated to finding great mortgage options and providing some of the fastest turn times for its borrowers.Since launching 25 years ago, Fairway has helped thousands of Americans achieve their dream of homeownership. Fairway employs more than 10,000 team members, including more than 3,000 producers at over 600 branches nationwide. With a strong focus on purchase business, Fairway funded $65.8 billion in 2020.For more information, visit fairway.com and home.com.

SHARE
From the last 30 days...
No items found.
View All